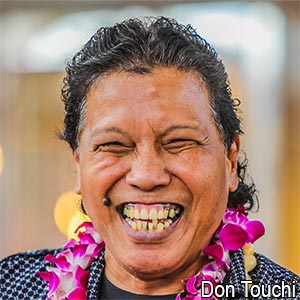 A protégé of the famous steel guitarist, David "Feet" Rogers (Sons of Hawaii), Bobby Ingano learned from Rogers his gentle style of guitar and humble philosophy of life. Now a highly sought after studio musician, Bobby can occasionally be seen touring on the mainland or Japan with the biggest names in Hawaiian music. His style of lap steel guitar is melodic, understated, and distinctly Hawaiian.

Bobby was born on Lana‘i Island. when he was seven, his family relocated to Honolulu. After being diagnosed with polio, Bobby spent the next 7 years in and out of Shriners Hospital. It was here, out of boredom, that he learned how to play the ‘ukulele, and was a natural, coming from an extremely musical family.

In high school, Bobby became immersed in playing the "blues" and joined a band. By the time Bobby was 18, having spent most of his teen years "bucking heads" with his father, Bobby moved out on his own and met a man who was one of the most notably influential people in his life–David "Feet" Rogers, original slide steel player of the renowned Sons of Hawai‘i. Feet instilled in Bobby the importance of playing with discipline and love. He would say, "When you play music, always have fun and the main thing is, making people happy…PERIOD! No worry about competition. It's not a sport. Just be happy and smile…and never, ever, put yourself above anybody else. Bobby, always, ALWAYS play from your heart!" It is this wisdom that Bobby now shares with young steel guitar players and other young musicians.

Bobby's CDs include his solo recordings "Steel 'n Love," "Steel Reflections," and "Stranger Here." Bobby is also featured as a soloist on 3 Grammy Award winning Hawaiian music compilations and is the steel player on a myriad of studio CDs by Hawai‘i's most prominent artists. He currently appears with Adam Asing and Kaipo Asing as the Bobby Ingano Trio.

Copyright ©2021 by Hawaii Institute for Music Enrichment and Learning Experiences, Inc., and Cyberventures Unlimited.Terms of Use