At Ke Kula Mele Hawaii, apprentices of all ages are learning the art of the Hawaiian steel guitar from one of the instrument's legends, Alan Akaka. Talented in their own accord, these students are closely following in their teacher's footsteps and continuing the legacy of the Hawaiian Steel Guitar for future generations. Students of all ages also receive instruction via Skype technology from locations such as various parts of the United States, Japan, Germany, and Russia.

This year's festival will feature some of Ke Kula Mele's youth steel guitar students, often referred to as the Next Gen steel guitarists, in solo and group performances. Ke Kula Mele's keiki students range in age from 11 to 16 years old. 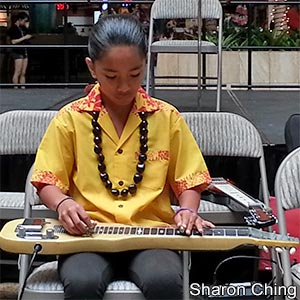 11-year old Malie is one of the Ke Kula Mele Next Generation steel guitar players. Multitalented, she can dance hula, sing, and play several other instruments including the 'ukulele. Malie has been playing for a little over one year but her interest and enthusiasm has allowed her to develop her playing ability considerably. It's obvious she enjoys entertaining, whether it's doing the hula, singing, or playing a musical instrument. But her musical talent and abilities are no coincidence.

Her mom is Pomaika'i Lyman and Malie is the great granddaughter of Aunty Genoa Keawe. When school and time permit, she appears with the Keawe 'Ohana at their Waikiki Beach Marriot Resort and Spa weekly show, dancing, singing and playing her steel guitar.

Malie showed interest for the steel guitar several years ago by getting up on stage during intermission and pretending she was playing uncle Alan Akaka's steel guitar. Her interest persisted, and she was finally able to realize her dream when she start her lessons with uncle Alan. 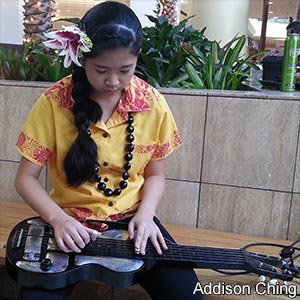 Alexis is 16 years old and a junior in high school. She has received training in the Hawaiian steel guitar for four years. She is a Next Generation steel guitarist at Ke Kula Mele Hawaii School of Hawaiian Music and a recipient of a music scholarship from the Hawaiian Steel Guitar Association. She also trained in the upright bass since she was in the 7th grade and now plays the upright bass in her school's orchestra.

Alexis has always been interested in Hawaiian music and culture. At age five, she started playing the 'ukulele and dancing hula. She started with and still belongs to the Ka Hale I o Kahala halau. When she's not involved with music, Alexis enjoys going to the beach, hanging out with family and friends, cooking, baking, drawing and arts and crafts. 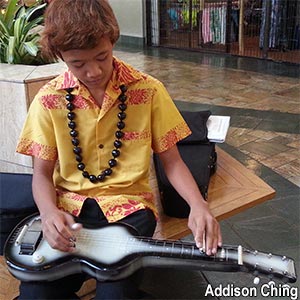 Keen, 16 and a junior in high school, started in music at age 7 with the piano. He was drawn to the steel guitar, because of its sound, after seeing it on a television show featuring Hawaiian music. After two years, Keen finally persuaded his dad to get him a steel guitar.

Accoding to Keen's dad, it has been Kumu Alan Akaka who has made Keen's dream a reality. Over the past 3 years Kumu has imparted upon Keen the ability to make that instrument produce the sounds he heard on the television show.

Through Ke Kula Mele and his Hawaiian Ensemble class at school Keen continues to pursue learning other musical instruments including the ukulele, acoustic and bass guitar.

Keen challenges himself to pursue excellence not only musically but also spiritually, academically, athletically and by having fun. He belongs to the youth group at his church and actively volunteers his service to the church. Academically he constantly pushes himself to assimilate as much information he can from his classes. He has participated with the math, underwater robotics, and medieval clubs in co-curricular activities. Athletically he is an integral part of club and school teams in bowling, soccer, and track and field. He is in the final stages of achieving his black belt rank in Shotokan Karate. For fun he pursues mastering the art of the yoyo and the latest electronic games.

Copyright ©2015 by Hawaii Institute for Music Enrichment and Learning Experiences, Inc., and Cyberventures Unlimited.Terms of Use